Planting A Tree With Every Purchase

Since June 2018 D. R. Harris has been partnered with Eden Reforestation Projects in a tree planting initiative to plant a tree for every purchase made in our shops and on our website. Additionally, five trees are planted with every wholesale order placed. Eden Projects were founded in 2004 and their mission is to reduce extreme poverty through the restoration of healthy forests.

Eden Projects started their work in Ethiopia and have active projects in Madagascar, Haiti, Nepal, Indonesia and Mozambique. In these regions many of the poorest inhabitants rely on the forest as a means of income, often through the production of charcoal and the trade in precious woods and timber. Increasing populations have made this traditional practice unsustainable and led to widespread deforestation and subsequent degradation of the eco-systems, often destroying the habitats of many endangered species of animals. 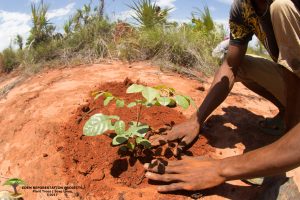 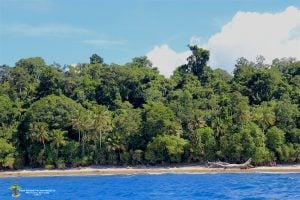 The results of reforestation can be seen on Biak Island, Indonesia

Through their work, Eden Projects have planted over 250 million trees, but crucially, they also provide a wage and purpose to local residents, many of whom were formerly involved in the destruction of the forests. Villagers are paid not only to plant trees but also to sustain them and protect them through their infancy. Many of these villagers would have been involved in activities related to deforestation, endeavours from which it has become harder to make a living in recent years as the density and quality of trees declines.

By providing fulfilling employment opportunities in their local environs, Eden Projects offers alternative options to villagers who would otherwise be forced to move to a city to find employment. Therefore the planting of trees not only benefits the wildlife and plant life of these areas it also helps to maintain the size and shape of rural communities. 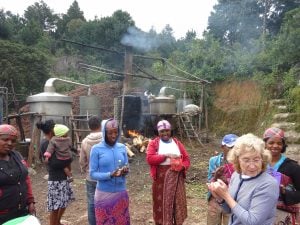 In the summer of 2017 Alison Moore, Managing Director of D. R. Harris visited Madagascar on holiday and was amazed by the variety of flora and fauna that is truly unique to the island. What was less heartening were the huge stretches of bare, desertified  land which had formerly been dense forests. From the air and from the road plumes of smoke could more often than not be seen, these the evidence of charcoal production.

The feeling was one of a country on the precipice of an environmental disaster. Alison wanted to find a way to help and when she learned about the work of Eden Projects it seemed like a natural fit.

Eden Projects have been planting in Madagascar since 2007 and their work in the mangrove forests has been particularly successful, now planting over 3.7 million trees a month. Here is a link to a video showcasing some of their recent successes: Rescuing Endangered Species in Madagascar

In the short time that we have been working with Eden Projects our donations, thanks to our customers, have helped to plant over 49,000 trees and provided 497 days of work. You can keep track of our progress here.

Progress being made in Madagascar

This website uses cookies to improve your experience while you navigate through the website. Out of these cookies, the cookies that are categorized as necessary are stored on your browser as they are essential for the working of basic functionalities of the website. We also use third-party cookies that help us analyze and understand how you use this website. These cookies will be stored in your browser only with your consent. You also have the option to opt-out of these cookies. But opting out of some of these cookies may have an effect on your browsing experience.
Necessary Always Enabled
Necessary cookies are absolutely essential for the website to function properly. This category only includes cookies that ensures basic functionalities and security features of the website. These cookies do not store any personal information.
Non-necessary
Any cookies that may not be particularly necessary for the website to function and is used specifically to collect user personal data via analytics, ads, other embedded contents are termed as non-necessary cookies. It is mandatory to procure user consent prior to running these cookies on your website.
SAVE & ACCEPT